The world is being rewritten around you | Leonard Brody

The Great Rewrite is about a fundamental resetting of this planets operating system. It’s the way to look at all the bits and pieces of the evolving technology landscape. 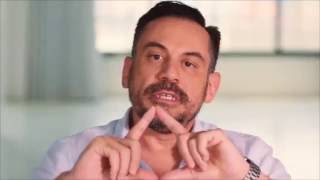 We are at this place that we've never been before. The great rewrite is about a fundamental resetting of this planet's operating system.

It's the way to look at all of the bits and pieces that are evolving and changing on the planet: technology, behavior, capital markets that are creating this perfect storm, where this world in which we've built was built on a paradigm of this sort of top down pyramid. So, you've got a CEO, you've got a principal, you've got a prime minister or a president, and you tend to flow power from the top down. We are living in this state of sort of societal seasickness where this pyramid is slowly inverting because of technology.

To think about what a rewriter is, you have to distinguish it between innovation and disruption. Innovation felt like we had outgrown it, and innovation today really just means doing stuff better. If you're a company in 2016, 2017, that has an innovation department, you are missing the point. It's the job of everybody in that organization. Disruption is somebody comes into a market, bottom of the pyramid, and they eat their way up the food chain.

A rewrite has something much more impactful on the tail end of it. It is about systemic change demonstrated by a ripple effect that whatever they do in the industry that they're rewriting, it has a deep impact on other industries that was often unintended.

Uber today as it exists is not a rewrite. It's a disruption of the taxi business. It's a transportation disruption. The driverless, autonomous vehicle is a rewrite, because it's a drop that has deep ripples. It's changing almost everything it touches. It's going to change the way the urban landscape looks. It's going to affect the environment. It's going to deeply affect the number of vehicles on the road, safety, insurance. It's also going to affect, geopolitically, our dependence on oil and on other fossil fuels, which affects our position in the world. So we should also be asking ourselves not just about how this impacts business, but what the age of rewriting is going to mean to just the average person living on this planet.

So, the goal for me and the goal for the program is to up the dialogue. We wanna give people three things. One is a north star that they can look at and question and challenge, and when they look at the world and they feel that innate confusion about the underlying change, they have a framework. This is about fundamental, institutional shift on the planet.

The second thing is to try to give concrete, great stories about how this is playing out on the planet today, how we're seeing it in verticals like manufacturing and health care and the financial sector and energy.

And thirdly, try to give some answers about what you do about it, a playbook that you can utilize to be able to at least engage in a world that's being rewritten around you.